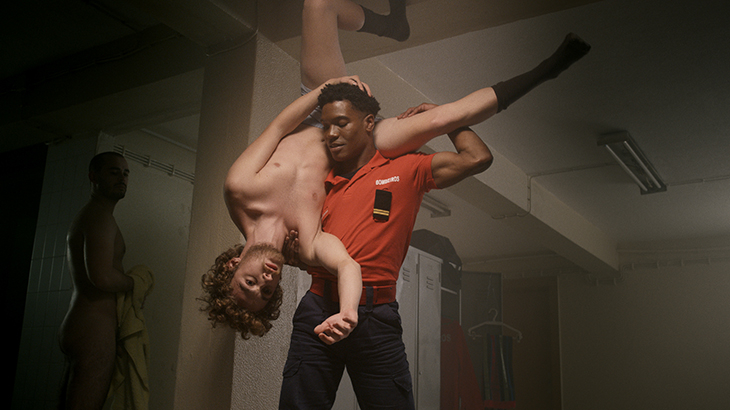 Queer Lisboa announces its twenty-sixth edition, which will take place as usual at Cinema São Jorge and Cinemateca Portuguesa, between the 16th and the 24th September, with our venues operating again at 100% of their capacity. The festival now announces the first titles of this edition's program.

The opening of the festival will host the latest feature film by João Pedro Rodrigues, Will-o’-the-Wisp, which had its premiere in the Directors' Fortnight of the past edition of the Cannes Film Festival, and that since has toured several festivals around the world and had a commercial release in France. This highly unusual erotic musical comedy evokes some of the founding myths of Portuguese collective imagination, inscribing in them a fair amount of satire and fantasy. In this story, a young prince abandons his royal family in order to join the firefighters with the mission to free Portugal from the fires that devastate its lands, ending up falling in love with a black firefighter who dearly welcomes him. Issues as diverse as climate change, republican politics and colonial history, find unlikely connections in this film.

For the closing screening, the chosen film is Esther Newton Made Me Gay, by director Jean Carlomusto, a documentary about the life of Esther Newton, an upmost social anthropologist, lesbian activist, and Gender Studies and Queer Theory pioneer. Responsible for bringing a new approach that challenged the notions of gender and sexuality present in anthropological methods, its impact was felt both in activism and academia. In parallel with the story of her life, the film offers a look at LGBTQI+ experiences since the 1950s, following the women's liberation movement, lesbian feminism, drag culture and the construction of a butch identity.

The festival also announces the Retrospective Notes on Camp: the Gay Girls Riding Club Drag Delirium, a dive into the “camp” universe of the cinematographic work of the collective that gives name to the program. Founded in the late 1950s by a group of men who came together every Sundays to horseback ride, they then began to organize drag parties (the Annual Halloween Balls), which ran until the late 1980s. In the early 1960s, the collective began to produce films that were "camp" at its core: parodies of Hollywood movie classics. The first GGRC film is thought to have disappeared: Suddenly, Last Sunday, 1962, a direct quote from Joseph L. Mankiewicz's Suddenly, Last Summer (1959), based on the seminal play by Tennessee Williams. This was followed by another short film, dating from the same year, and already present in this retrospective, Always on Sunday, a parody of the Greek film Never on Sunday (1960), by Jules Dassin. In 1963, the troupe filmed What Really Happened to Baby Jane, which premiered just a couple of months after the theater premiere of What Ever Happened to Baby Jane? (1962). Also from 1963 is The Roman Springs on Mr. Stone, a drag parody of The Roman Spring of Mrs. Stone (1961), by José Quintero. The first GGRC title that is not a direct reference to any specific film appears in 1967, The Spy on the Fly, a satire on the first films of the James Bond saga. In 1972, the collective's first and only feature film is released, All about Alice, a direct allusion to Joseph L. Mankiewicz's All about Eve (1950), starring Bette Davis and Anne Baxter. In this retrospective, both the original films and the works that were inspired by them will be shown at the Cinemateca Portuguesa.

This year, the programming team of the Queer International Film Festivals - Queer Lisboa and Queer Porto considered 1.167 films, 423 of which were received as submissions. Queer Lisboa 26 competitions and other out-of-competition programs will be announced over the next few weeks.